The Creative Breaks Programme was a brilliant opportunity to collaborate with talented and creative people to highlight some of Manchester’s hidden gems. Union Street Media Arts and PANDA Arts helped me develop a lot of skills that are important when working with other people, including communication and interpersonal skills. I also learned how to use filming equipment such as cameras, microphones and lights, and I found it really exciting and fulfilling to learn how to present my ideas in a new artistic medium. 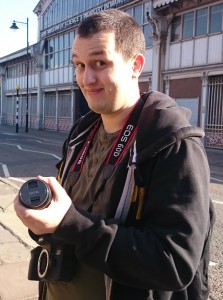 Union Street and PANDA were always available to help us along every step of the programme, from assisting us with equipment and making contacts, to moral support and relieving stress with a good brew. We received a ton of constructive feedback with our films and we got the chance to present the documentaries to project leaders and investors in Manchester, including Julie Ward MEP. At the end of the programme the even had the opportunity to tour European Parliament in Brussels and have a look at some of the art projects being run in such a beautiful city. We visited Zinnema – a facility for artists, musicians and actors in Brussels – and also presented our documentaries to them.
When we returned from Brussels, we found out that our documentary, Reflections on London Road, won the Judges’ Choice Award at the the Manchester Community Histories Awards. At the awards ceremony it was very interesting to learn what others were doing to celebrate the people and city of Manchester. It was touching that the story of London Road Fire Station and the families who worked there had resonated with people and it was a fantastic experience helping to preserve a part of that history. I would recommend the Creative Breaks programme as it has been a fantastic experience and is an opportunity to meet and work with talented people.
by Mark Roberts, Creative Breaks year 1 participant working on the award-winning London Road Fire Station film